It felt like being stalked constantly by an ancient evil, one roused from slumber by the pleasing sound of chaos and the rattling motion of heedless idiocy. Three dead dogs and two car accidents in the space of a twenty minute drive from Beirut to Sidon.

The first one of which I passed was like a vacuum or zero point outside of time. The scene shimmered with death and helpless policemen stood frozen inside the zero point and an unspeakable dampness of the punctured and lacerated oozed beneath the torn body of the car and whoever had been in the back seat. I didn’t even focus on the front seat, suffice to say it’ll probably be in Monday’s paper with lots of wringing of hands and impotent wailing as nothing whatsoever is done to curb the rate of traffic deaths.

The second accident had been much more cordial however, and the police busied themselves taking notes and employing themselves with the bureaucracy of poor but sometimes energetic infrastructure; usually long after the fact, writing up notes for the insurance companies which of course failed to mention the rotten condition of the roads and the lack of interest which anyone in the country seems to really have about people getting killed in road accidents.

If they cared about traffic deaths they wouldn’t drive like assholes. But they do. Stupid assholes who don’t understand the dangerous power of Newtonian mechanics and the frailty of human flesh and bone when rattled and wrapped up in high speed collisions with metal and stone. I drove here and I was terrified. Every maniac pulling out from nowhere, every plonker who suddenly stopped his car on the motorway for no reason, was an assault on reason and my worn nerves.

As I write this, a glass breaks smashed to the ground at the sushi bar at Beirut airport overlooking the improbably tower blocked deep receding hills of this city of relentless concrete.

Death is a powerful word. It resonates whenever it is written or even thought. In dangerous ways. The Almaza pure malt beer has opened up a corridor of communication between my ever-mute locked-in self and the cheerful white screen whose purity I do not conceive of corrupting only enhancing with nothing but the bloody truth.

In addition to three dead dogs and two dead cars I bumped into what I can only describe as some idiots from Hezbollah.

All I had wanted to do was investigate a couple of ancient Canaanite ruins and maybe a crusader castle. The day was ruined and my mood blacked to apocalyptic levels of impending bomb destruction by bearded goofs in the mountain villages harassing passing motorists with DVD’s of some silly bearded Fakir.

I hadn’t thought much of it initially, except that these interminable mountain villages which took me closer and closer to the Syrian border were alternately either bedecked with posters and billboards for some odious secular politico with a child-abuser face, or else a mystified looking madman with a beard looking to draw in other mystified mad-men with beards. Like some kind of ever accumulating mass of human hairiness which will roll down the mountains like a vast human tumbleweed snagging more bearded men into its obscure depths.

In fact I'd often been asked while living in the Muslim world why I don't have a beard. The answer is obvious: Because I'm not a Broadway Market hipster wanker. Fuck beards. I hate them! They belong to Communists and cider tramps.

The first time they had left me alone, as I glided by in an improbably luxurious and sleek looking black Kia Optima. I’d only wanted a bloody Ford Fiesta but they just had to go an upgrade me to something too big and expensive to really drive in this country on the verge of autogeddon apocalypse.

I was too tired to refuse. So there I was, buzzing around these dead dirt poor rubbish strewn hills in a fancy shit-mobile, a smooth faced chimp in three-quarter length combat shorts and blue Quicksilver hoodie. Dressed like the beach cunt I really and obviously was.

It was the same blue hoodie farmed from TK MAX  that I had worn at the March Against Terrorism in London the day before which I hoped wasn’t in any way affiliated with Britain First or any such bare-knuckle neo-nazism. The SAS guy had put on a damn good show though, when referring to the government’s instructions in a terror event; not to hide under tables and cower, but to ‘Stand and defend and protect!’. Can’t argue with that. Would like to think I would put that into action if the worst case ever arose.

I knew an SAS bloke once, he would tag around with North London UFO hunting weirdos for some reason. Told me all about the SAS training. Not just the rough stuff, but the dirty and depressing mind-breaking stuff. They pretended that the IRA had caught them and would then torture them, even involving their own families in the charade. I think it left a bad feeling with him.

But to return to the bearded ones. The first time they had harassed some other motorist with their beards and DVD’s. And I think he had bought one. A kind of Sunday Market banditry arrangement seems to have been taking places in the hidey hills of the deep Lebanese countryside. It was Sunday too. Maybe they had a car-boot open somewhere too selling iffy Calvin Kleins and moody bottles of Chanel Number 5 from a suitcase.

The second time they annoyed me though and got my attention. They were in the road, doing their flea-market banditry thing, and two of them came close to my car, I waved at them charitably to acknowledge the length of their beards, but they advanced.

What was I supposed to do with a DVD about some bearded Shia messiah or other who was probably no more holy than the oily looking secular politician of the previous village. You’ve got to hand it to Hezbollah for SHIA brass balls to pester westerners with their rubbish. I put my foot down on the accelerator a little, but being used to driving around back home in a slightly underpowered Toyota Yaris I was surprised by the power of the motor it gave a screech of wheels and a dirty vroom sound which sent them scattering. “Sorry about that” I didn’t say.

I tried to stop myself calling them fucking idiots, especially when they started tapping on my window with one of the DVD's. I got my karma though since the road I was following suddenly became a dead-end. For a moment I saw a car following me close behind at high speed and wondered if they were after me for rejecting their lord of the beards, but then I lost interest and got on with my drive, doing a u-turn and turning off at the turning I had missed before and saw the beards no more.

Worse and even more annoying than Hezbollah were the goddamn speed-bumps which the authorities feel the need to randomly lay everywhere on every road in Lebanon, without even a warning at fifty yards. True, some of them had once been painted yellow but nothing now remained of that ancient chroma to give the clue to the deadly danger. As if the country didn’t already have a problem with car accidents. Few things are more lethal than a sleeping policeman who overslept and no one knows he’s even there. But why did they even need speed-bumps anyway? The roads were already wrecked with so many cavernous pot-holes which I pondered might be the result of Israeli hellfire missiles from the 2006 war.

Tony Robinson and his Time Team could probably have spent a satisfying week at one of Lebanon’s pot-holes.

I also pondered whether the lack of signs regarding the presence of speed-bumps on all of Lebanon’s roads might also be some tactic to slow-down any projected incursion by the Israeli army or even ISIS. For that matter there were no signs or highway infrastructure to speak of. Motorway lanes had not been redrawn since the French or Phoenicians had first built them. Roundabouts and traffic lights came upon the driver with sudden surprise and alarm and we all just seemed to roll with it, like some kind of frantic Commodore 64 game or the hardest ever level from Crash Bandicoot.

The traffic lights were made all the more surprising since none of them worked but clearly they were supposed to, being placed at dangerous and busy intersections. So it was an interesting free for all which probably claimed at least a couple of traffic accidents per day and possibly some lives every other day.

I had had plans to visit the Temple of Jupiter or Baalbek, a deity whose name I believe should not be pronounced to sound like ‘ball-bag’. He or it was the evil child sacrificing monster Satan of the Canaanites but he had now left the Temple to the tourists and was probably busy messing about creating deadly anarchy in the highway infrastructure.

After meeting Hezbollah, zombie policemen and dead things on the road, I’d had enough. I pulled over at a coffee shop and ordered a coffee. Bought a packet of Davidhoffs from the garage and smoked a long couple or three ‘fuck this’ cigarettes, before driving my rental car back to the safety of the airport and hiding in the bar until my flight and escape.

I picked up the copy of the Labanese Daily Star, which was by no means any relation to the British titular version, but more like a slightly less weighty Sunday Telegraph full of news from the front line battle against ISIS. It seems that our bearded Shia chums the Hezbollah have joined the regular Lebanese military in their battle against ISIS, of course I didn’t get particularly close to the front lines but it made me realise how easily I might have done. And what might I have found when I got there.

I’m quite tempted to book a cheap flight with Whiz-air, write a fictional hotel name on my immigration card, and actually see what all the fuss is about. Though I doubt ISIS could ever take Lebanon. They'd never survive the traffic. 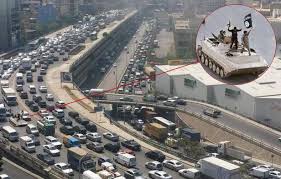 Popstars of the Apocalypse II