Our home is the sun. 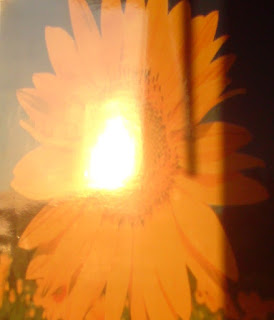 The sun is alive. It is the origin of all life. It makes perfect sense  that what has the power to give life to us and this world must also  itself be alive.
Light itself, more specifically, photons are the vessels of  consciousness in this universe. Photons in fact are all uniform and of  the same nature, there are no anti photons or positively charged  photons.

Although an 'anti photon' has been postulated, but in fact this would be  the same as a normal photon, except it would be travelling backwards in  time.

The world we live in is in reality two worlds which are superimposed on  each other, but which have separate existences and can never truly  combine. Like oil and water. There is the cold darkness which contains  all of the matter in the universe, most of which is so devoid of light  as to actually be invisible. Matter is also the origin of gravity. Hence  a ‘grave’ is deep inside the earth. A grave voice or grave news has  nothing light about it, it is serious, it relates to a serious ‘matter’.

Whereas light is so amazing that it creates buoyancy to our spirits, it makes them light!
It is these two worlds which are mixed together in this dimension, the  grave and the merry, the serious and the happy, the heavy and the light,  the dark and the light.

We are here ‘fallen’ to earth. The fallen angels are ourselves. The angels are ‘angles’ of light.
We are angles of light which have become trapped on this planet composed  of matter and which we are presently animated and populating with all  the conceits of our supposed intelligence.

The Illuminati and Satanists simply wish this world to be our ‘only’  world. They want us to forget our true home in the sun and focus solely  on this material world. The reason is because they KNOW that our true  spiritual home is the sun and that we belong there, but that they  personally do not want us to return because their minds and spirits have  been corrupted by the whispering darkness of the earthbound spirits who  have lost their connection to the sun and lurk deep within the  continuum of endless darkness. These spirits feed themselves by feeding  from the energy of the living, so the masons and witches who commune  with them feed them their soul energy, they also stage rituals and wars  in order to feed these beings who they have bound themselves to over  many centuries since the ancient Egyptians and Sumerians started  communicating with spirits in order to learn secrets of changing the  material for gain and power.

Metalurgy, stone masonry, even the discovery of fire, are all said to  have been learned from interested spirits (whom they called Gods). It  was often said that other spirits would punish those who traded with the  humans, but perhaps the reason was merely to allow the spirits to drain  the extra energy which had been first acquired from the humans.

It is for this reason in the old testament that we see often ‘God’ asks  people to sacrifice their sons and daughters to him. The Biblical story  of Abraham and Isaac is very typical, and reflects an expectation of a  father that his son would automatically be sacrificed to God if he  required an energy snack. However the miracle of the story of Isaac is  that his own good fortune meant that his son was safe since a goat was  found nearby, and these are the classic sacrificial beast of God.

This is why Satanists are obsessed with horns and the ‘devil’ apparently  has them. He was merely another God of sacrifice and people used to  dress themselves up the devil when taking part in sacrifices, mostly of  animals, but as in the instance of Canaan and Carthage, of children.  This is why Moloch was a bull god, it was a symbol of animal sacrifice.  The horns represent sacrifice of energy to feed the spirits, while the  meat energy is used to sustain humans.

The different planets are different bases for various levels of spirit  beings. They are extra terrestrials since they do not live on earth, but  they are children of the same sun. They are our planetary neighbours.  Often these beings materialise in some form and so rods and strange semi  existent UFO’s may appear.

The further from the light of the sun each planet is the closer to  darkness it is. This is why Saturn is identified as Satan as an  archetype of evil, while his partner, Jupiter, was identified by the  Romans as their God, the Greeks knew him as Zeus, and the Romans also  called him Jove. The leap from Jove to Jahweh or Jahovah is not a  suprising one, and so we see that these ancient people all revered the  same celestial body as their God.

The celestial body however is not merely dead lifeless matter. Light  strikes the surface of the planet and infuses the whole body, creating a  field of consciousness which is at once separate from God and yet  composed of the same stuff.

However it is not a source of light or life. And so no Jehovah did NOT  create the world. The light from the sun combined with rain and massive  photon charges through lightning created the life on this world as we  know it.

Proof then that 'life' is something which migrates from light into matter.