Flat Earth beliefs and schizoid psychosis in the 'Truth Community'. 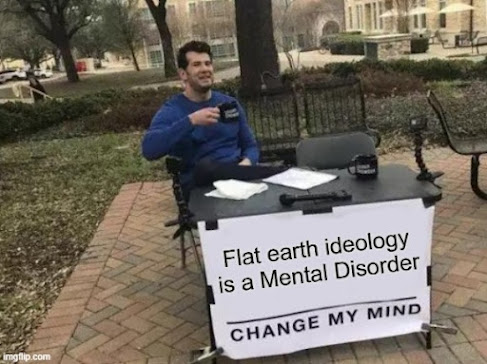 I cannot grasp what is driving the current sub-current of belief in flat-Earthism.

It defies not only any rational or logical cognitive framework but even defies the concept even of a conceptual framework.

Flat-Earth belief is almost purposefully and maliciously irrational and the fact that it requires a completely implausible and impossible set of circumstances in order for it to be true doesn't seem to  bother Flat-Earth people who are happy to 'invent' the universe as they go along in order to create a weird fantasy backdrop for their Flat-Earth reality.

When I looked at Flat-Earth from the viewpoint of the schizophrenic it fit and made a kind of sense.

The only cognitive framework within which Flat-Earth makes any sense is within the concept of extreme mental illness.

I say this because for the schizophrenic personality, the whole of reality has become both unreal and threatening.

A schizophrenic will look at the horizon and the sun set and will 'see' or 'perceive' an unreal cardboard sky like a movie backdrop and a sun watching him or her, as if it were a spotlight, placed there, to peer at him, as he goes about his business.

They will know, either rightly or wrongly, but partially rightly, that this is all an illusion, and that there is something 'behind' and 'beyond' the cardboard sky and the sun staring at them, like a bright burning eye, watching them moving to-and-fro on the surface of the unreal stage which has been set for them.

The sense of total unreality is absolutely central to understanding why people believe in Flat-Earthism, because despite their protestations and claims, logic and scientific measurements can never carry the argument.

The sense of a mechanistic, Newtonian rational universe, entirely dissolves as a plausible reality to the shizoid mind, who knows, that there is something MUCH BIGGER going on. Again, they are partially right, but in a sense, are being exposed to too much information, which their human mind and senses cannot handle.

So..... in order to circumvent this, the schizophrenic Flat Earther has to externalise or project their sense of unreality to the Earth and everyone living here as a whole, in order to feel 'normal' with their unreality.

This way the Flat-Earther is the one who 'knows' that the Earth is flat, and everyone else is conveniently wrong.

The larger the Flat-Earth group gets, the more comfort, solace and security these schizophrenics feel about their own delusions which by sheer force of cultural resonance and repetition actually gain reality in the real world and as we have seen, become a cultural current in their own right.

Therefore, it is no use arguing with a Flat-Earther because you are probably dealing with someone who is medically insane and at the same time, has their whole reality invested in this belief. A man will fight to their last brain-cell to defend their sense of reality.

I write this both as a personal investigation, and I am glad to have been able to solve a minor riddle in my own mind, but also at exasperation at how far this self-serving cult of mental-illness has infiltrated the Truth Movement and succeeded in largely discrediting the conspiracy movement as a whole.

I also believe that there are non mentally ill agents and perps involved in promulgating the Flat-Earth information, but what is surprising is the sheer level of up-take amongst people in conspiracy circles. The Flat-Earth schizophrenia hypothesis explains this riddle.

Flat-Earth beliefs allows the schizophrenic to be the sane-one at last, and the rest of humanity to be the ones in error. One can understand why this might be appealing to such people.

So the prevalence of Flat Earth beliefs, although apparently laughable and ridiculous, signals a disturbingly wide distribution of psychotic and shizoid cognitive patterns, in our online communities.

UPDATE a rather awful but pertinent example which underlines this point was published on April 5th, in the Daily Mail.

Just be careful out there....not everything you read in the Truth Community is going to be true, or even useful to you. I have always said...use discernment.... Where attention goes....energy flows...and sometimes this can be dangerous.

Posted by Truthspoon at 20:10 No comments: