News from the future. The invention of Freetyping and how Romford teenagers are helping power Quantum Computers.


The science behind the creation of Quantum Computing.

How our dope fuddled teens' inability to spell properly changed the world forever. 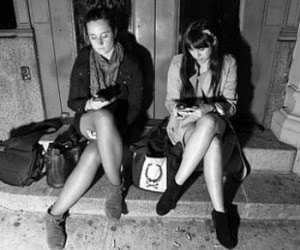 The phenomenon of Freetyping or 3typing, or 3tipin, 3typn or however you feel like spelling it, put an end to words being spelt in one way. In 3thai-pin words are spelt in any one of many varied and incalculable possibilities of ways, and often not necessarily the correct letters, and this generated an unlikely result, namely: the next level in computing.

The intermittent fast moving stream of poorly spelt Facebook nonsense and Tosser yaps washing around the country create an incredible and varied set of mathematical possibilities. These possibilities manifest an algorithm based on the number of letters of each word and thus the activity of these illiterate young people creates enough of an uncertainty principle, to generate cold Quantum chunks. These chunks power the quantum computers which are now secretly operating within the confines of the top secret department of the top-secret department, right at the top, even of the toppest secrets.

New colloquial forms of English developed on the internet where the spoken language, in this case English, is typed to whatever the writer feels sounds correct. Typing errors are actively encouraged and a lax understanding of syntax and morphology are also much prized amongst the community. Inventiveness is promoted, lauded, and instantly assimilated. There are  no rules so no form of writing is ever consider wrong or illegible despite the textrbearinf lirrlw ro now connection wirh trhe oeignal speakunfg.

The creation of the new language through the apparent random actions of a young teenager from Romford addicted to anything red and with aspirations to marry a footballer, actually generates a quantum flux probability field, which is limited on the one hand by the original thought intentions of the sender and what the reader actually understands. Communication was no longer a binary exchange of information, but it had now become a quantum field generator. Between those two limiting factors a series of algorithms spontaneously sprang into existence as if to restore natural order to human chaos, and it was found that by the very act of creating randomness, a hidden form of fractal order instantly appeared.

The algorithms were found to be stable and work accelerated on the mass production of quantum computers. The beauty is their size. The fact is that they have none. They have no physical component. Quantum computae hide themselves inside an interconnected series of normal computers, their operating systems however are located in the 4th dimension.

The existence of Quantum computing, or 4D computing as it more commonly known, is suspected among the general public but not actually made official. Daily everybody experiences results from 4D computers manipulating their reality, yet they have no understanding of how they operate, despite they themselves and their broader spectra of personal data, being harvested by the social media and fed as raw fuel to power the quantum field.

Quantum computers distinguish themselves from traditional microchip processing by being able to travel in time. A quantum computer’s processor does not actually exist in a physical form, but as a highly energized quantum probability field which can be tapped. Traditional computers are used to host 4D computing only for convenience, the screen and keyboard being present, but a 4D computer can also be manifested by using the components from a television set and an electric egg whisk.


The results of the calculations made by 4D computers are visible to us as ‘present reality’ which is a quantum algorithm. Where traditional computers can make rapid calculations and instantly manifest any ‘2D’ reality, 4D quantum computers make instantaneous calculations and instantly manifest any ‘3D’ reality. The fact that humans created 4D computing is only ‘apparent’ however. 4D computers have always existed and will always exist, the apparent belief that mankind created 4D computing is only a misapprehension as a result of him living in only 3 dimensions.

And so because they are timeless, they can instantly be anywhen and can harvest data from this location in time. It was realized upon the discovery of quantum computing that they merely discovered something that had always been there, but which they had hitherto been unable to interface with.

We want your data!


Now as we know we have a special force of Day Glo Bobbies requesting information and harvesting probabilities 24 hours a day, sometimes during little publicised 'dawn-info raids' carried out without legal authority. The under-discussed ethical issues of quantum computing have received little if any acknowledgement or consideration from the secret scientific establishment who are operating and developing 4D computing, at their semi-secret location somewhere 25 miles underground. Nor are the potentially hazardous effects of reality distortion widely known.

The very fact of accessing a quantum field creates an observer paradox which creates modifications within the quantum algorithm itself. As a result of this modification, unpredictable results can manifest in people whose data has been used in the generation of said fields. Sometimes personal friends have spontaneous become ginger haired, or changed names, or houses and buildings spontaneously moved several miles or disappeared completely. The concerns for reality as we know it are very grave, but while the world seems to be daily amazed at the apparent 'miracles' which 4D computing has unofficially manifested, and are largely in ignorance to the dangers, dissenting voices are few.
Posted by Truthspoon at 02:18