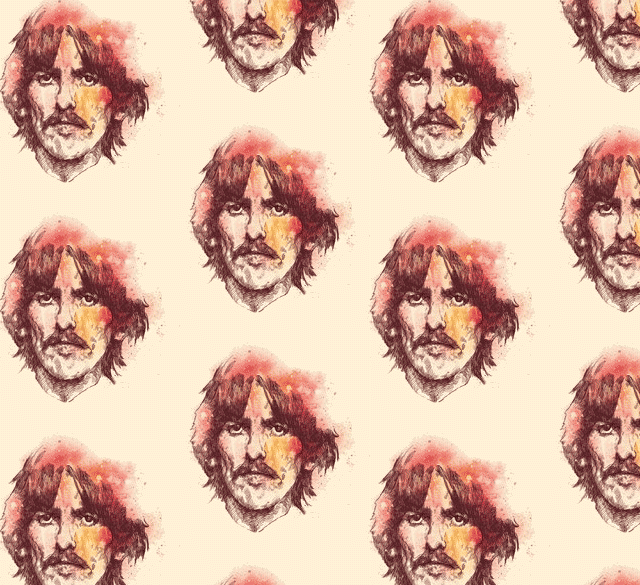 There has recently been talk on a certain internet forum about the existence of two George Harrisons. This idea is based upon the same fallacious reasoning as that which led to the rumors of multiple Paul McCartneys in the late 1960's. This suggestion is totally erroneous and symptomatic of the worst kind of disinformation which websites handling sensitive information tend to fall prey to. In fact there were a total of nine George Harrisons in use during their operational heyday, not two.  Originally only four George Harrisons were required because any more would be a security risk and also because there weren’t enough sitars to go round in the UK at that time.

One of the clone George Harrisons became contaminated in the lab and George Harrison’s alien DNA mustered its defences and to combat the pathogen, George Harrison’s genetically alien engineered body started to asexually reproduce.
Suddenly there were more George Harrisons than one decade could contain and there were fears that a stray George Harrison might travel to the 1860′s because the 1960′s were full. And this would inevitably lead to a pop paradox in time.
So the loose George Harrisons were safely contained, then implanted with a special mind control chip made of a newly discovered hallucinogenic metal and a radioactive isotope of LSD, and sent to wander the sandal shops of Goa for a half life of six thousand years, where they can still be seen today if the light is right.
While George Harrison was being cloned and weaponised by refugee Nazi music scientists in the secret pop apocalypse project entitled Operation Papershop, Ringo Starr was created to act as an inter-dimensional gateway to the marine world and home of the dark Archons, alluded to in coded references in the songs Octopus’s Garden and Yellow Submarine. For 3 thousand years the secret priesthood of the 33 Revolutions sect, secretly waited in secret, for their great Avatar to be made manifest in human form.
The holy child was born on the astrologically ordained date of 7th July 1940 (7,7, 7 (1940.. (40-19)/3 = 7) and his birth name Richard Starkey, when properly decoded became RICHard STAR-KEY, alluded to his role as inter-dimensional medium or key to the stars.
The correct technique on how to use a Richard Star-Key remains to this day, one of the many secrets protected by the 50 year rule which concerns the highest level confidential information relating to military espionage, international diplomacy and pop music. But it is believed that activating the Star Key involves the portal itself producing a dull repetitive and poorly syncopated sound using drums, thus creating a frenzy of disassociative anguish. It is believed the ritual of the Star-Key culminates, and the deepest apotheosis of horror necessary for the Star Key to open and release the Octopus men, is achieved when the Richard Star Key begins to sing.


The effects of the Star-Key in a crowded room created small disaster areas, with women screaming in horror as the underwater Archons were released into the audience of terrified virgins.
These women were all of course astrally impregnated during the show and 9 months later they gave birth to Archon/Human hybrid baby ghosts which were invisible and didn’t exist.
In 1966 it was decided that further public rituals were no longer necessary as it had been previously discovered in parallel magickal workings, that demonic marine Archons could be manifested in the comfort of your own home, and the same restless anguish could be induced by imbuing a sacred disk with a special resonant field and having the magic disk turn upon itself the sacred sum of 33 times in one Earth minute. Therefore many disks of anguish were released into the world, which, being in a primitive spiritual condition, treated these disks and their discombobulating sounds with great joy and happiness.
Richard Starkey, unlike other weaponised pop stars such as Keith Moon and Janis Joplin, was never officially decommissioned and remains active to this day in the greater Los Angeles area of the United States of America.
Posted by Truthspoon at 22:26