Feminist Gorgon Witches of the Apocalypse.


If it’s a war they want, they’ve got one. This particular writer is taking up arms…well, opening up MS Word, in defence of MEN and society as a whole against the straggly bedraggled feminist witches of the apocalypse.

Such creatures tend to be incubated in the golden summer days of a contented society with hope for the future and they are patronized and placated with university research grants which keeps them quiet and only able to pester and abuse the poor men who happen to enter their university domains and make the mistake, as I did, of studying English Literature and being at the mercy of an insane and over educated elite club of Marxist Feminist Witches.


However now the golden summer days of human civilization seem to be at an end and to paraphrase the Protocols of Zion they have unleashed their long incubated army of feminists upon a culture in which men and women generally got on quite well, fell in love and hell, even got married and had babies and stuff.

Now, war is upon you, whether you want it or not. The massed ranks of unhygienic femi-witches who celebrate their independence by disdaining showers or shampoo are released from their academic holding pens and the obscurity of the lecture hall, to fall upon the world and prey upon society, draining human gender relationships of meaning or any chance of happiness.

If you are a man then you are in the sights merely for being a man and creating civilization. Everything you have done was always to oppress the wimins and now the reckoning is due. The witches are abroad, casting their spells in the press and assaulting reason and logic for  ‘foul is fair and fair is foul’ just like ‘Fat is beautiful and beautiful is male objectification.’ 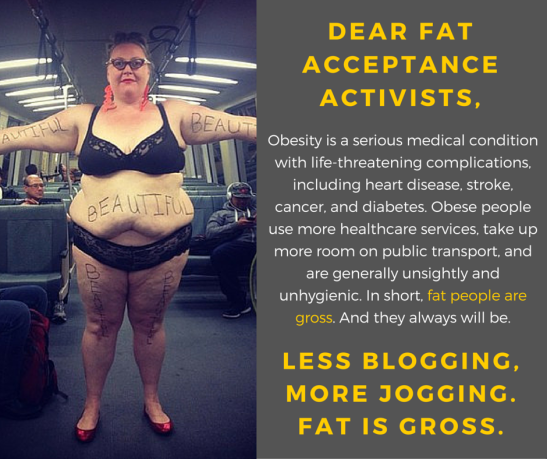 The hordes of broken women, recently empowered by feminism and heavily subsidized by the hidden hand which has waged war on Western civilization, are those whose ugliness and poor character, in a sane world would be rightfully disdained and probably relegated to gardening jobs where they can only inflict their bad dispositions on weeds and the slugs in their cabbages, but in our strange Back to the Future Alternate 1985 world where everything has suddenly all gone wrong, and they are now the new intellectual elite.

They have been given the keys to the kingdom of knowledge and they have burned down the house and instead erected an altar to their own unwashed vaginas and only those who have ritually castrated themselves with Marxist Social Theory will be allowed to enter.

One such eschewer of shampoo and reason is Joan Smith. Perhaps once, in Ms Smith’s family there was once a man who made something at a hot iron forge, perhaps horse shoes or perhaps the man mended a plough. Doubtless the man whose name was once Smith served a useful and constructive purpose to the world around him.

But the fruit has fallen far from the tree and Ms Joan Smith is nothing but a very bad apple, all acid and bitterness. Something which ought to have fallen on stony ground and been allowed to rot quietly away into the mire. But now, she has been given a rich firmament and her bitterness has been watered with years and years of secret delusions.

Likely from the Frankfurt school who once gave her a nice stipend for writing an essay and she realized that being bitter and foul can be a good career move for someone with no discernible talent or ability to provide anything useful or constructive to society.

Ms Smith’s career is built on nurturing discord, discontent and destruction. Destruction of female happiness and the severing of the ancient human bond between men and women. Along with a fascination with witches, atheism and Marxism, an ideology which has so far cost up to 100,000,000 human lives.

Now women under the spell of feminism have been rendered unhappy and those men who have realized that they no longer need to be sitting ducks for abuse can go their own way. The MGTOW men figure if women have all turned into mad feminists who want to castrate us mentally and literally then why not learn the guitar instead?

With the growth of the internet and the devious trickery of AMP (Accelerated Mobile Pages) which specifically harvests obscure stories from Marxist rags like the Guardian and The Independent which ought, due to the diminishing readership of print editions of these journals, be consigned to becoming  a wet patch in the rabbit hutch of some social worker’s house and his bearded partner who works in advertising, but alas, the internet has deviously brought up all this cat-litter journalism to be endless churned over and over by the power of the internet.

So now whenever I want to check in on my favourite US soap opera: President Trump, I have to be exposed to the views of bedraggled harpies fresh from the blasted Heath assaulting my senses with their snarling misandry and lack of hair-care programme. I hate the Guardian and I hate Feminists, witches, Marxists and Atheists...but I am rather interested in the Trump Show, so why whenever I type Trump into my mobile Google search am I exposed to the views of Marxist Feminist Atheist witches with bad hair? I don't care about you. Leave me alone! Damn you AMP.

It is an alarming insight into how Trump (though, not just Trump) operates. Few politicians, no matter how thin-skinned, have displayed such neediness nor demanded such displays of unconditional love from their supporters. Neediness is not usually considered attractive in men who like to be thought of as tough, but Trump is rewriting the rulebook on masculinity.


What concerns me about Feminist Zombie witches of the Apocalypse with poor hair care, is not only that they pontificate on matter of femininity as if they own every woman's gender, but now it seems they are branching out and telling men about being a man, as well as engaging in tiresome gender based attacks of smearing Trump with some kind of sexist gender based attack.

When did you ever read a male writer having a go at a famous woman claiming she was suffering from 'fragile female ego problems' and then goes on to tell the woman what a woman should be?

You don't. You won't hear this, never. Because this man would be labeled a misogynist and not allowed anywhere near a newspaper. He might live in the internet and frequent websites like MGTOW.COM, but be assured that society would be duly mobilised to track such a man down and use any and all power if could to discredit and attack him.

I wonder to what extent literal extent the schizophrenic priestesses of the old mystery religion, attended by a priesthood of self castrated ‘males’ mewling and rolling around like neutered pussy cats, describes the paradigm of this particular author and her readership. History repeats itself, although admittedly, it tends to have a wardrobe change. So what were once the witches and priestess of the mysteries are now female journalists and academics, exhorting the degrees of their mystery, the outer portico or blue-lodge degrees of which are atheism, Feminism and a little bit of Marxism for good measure. Yet what lies beneath? What really happens in the minds of these people, because it's beginning to more and more resemble mental illness.

A group of witches is attempting to use black magic to neutralize U.S. President Donald Trump by casting a “binding spell” to prevent him from governing.

The “mass spell to bind Donald Trump” will be performed at midnight on every waning crescent moon beginning Friday, February 24, “until Donald Trump is removed from office,” the group’s website states.
The mass ritual will allegedly be repeated again March 26, April 24, May 23, June 21 (the summer solstice), July 21, and August 19.
The spell also invokes evil on “those who abet” Trump, which would seem to appear to cover his staff and political nominees, and perhaps the millions who voted for him as well.


The spell involves such items as an unflattering photo of Trump, a tower tarot card, a tiny stub of an orange candle, a pin or small nail, water, salt, a feather and an ashtray.
“This binding spell is open source, and may be modified to fit your preferred spiritual practice or magical system,” the site explains. What is critical is “the simultaneity of the working” as well as “the mass energy of participants.”
“Some lodges/covens are doing a variation of this as a group working, while a number of solitary practitioners are planning to connect and livestream via Facebook, Twitter, and other social media,” the site explains.
In reaction, a number of Christian groups and individuals have promised to pray for Mr. Trump, asking God’s blessings on his work and on the nation.
The witches’ spell involves a lengthy incantation, calling on spirits and “demons of the infernal realms” to bind Donald J. Trump so that “he may fail utterly, that he may do no harm.”
Calling on the spirits to work the same harm on “all those who enable his wickedness and those whose mouths speak his poisonous lies,” the hex beseeches the spirits to “bind them in chains, bind their tongues, bind their works, bind their wickedness.”
The climax of the spell involves a crescendo “with increasing passion” ending by blowing out the orange candle while “visualizing Trump blowing apart into dust or ash.”
Posted by Truthspoon at 15:53

Popstars of the Apocalypse II