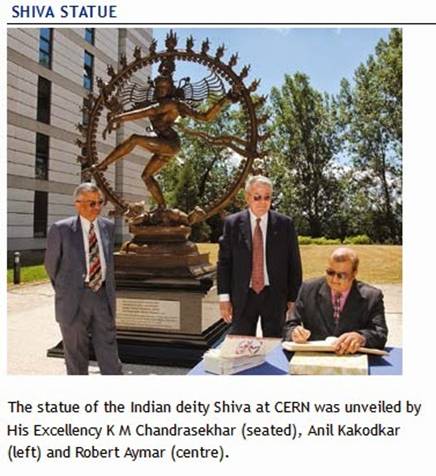 The typically misinformed media spin around the search for the so called ‘God particle’ shows the level of simplicity and reduction with which science is delivered to the general public, to a degree that it becomes essentially meaningless. This is hugely counterproductive and harms science and human understanding of the nature of the reality they exist within.

The purpose of the Cern collider experiments is not to find the 'God particle' which of course does not exist because it cannot: that which is outside the universe cannot be contained within it, nor indeed will the Cern collisions provoke the end of the world as some of the equally misinformed conspiracy commentators fear and fret that it will. The Cern experiments are merely trying to get a closer look at the 4th dimensional origin reality.

Of course it’s all an enormous waste of time and money (and perhaps this also is one of the purposes: to find a convenient cash sink on which to waste public money so that actual human quality of life does not improve and all the attendant problems and inconveniences this may cause for the power-structure, if you are unsure of this mechanic then read 1984 again, George Orwell is quite explicit and I believe this man knew a thing or two about the nature and purpose of The Establishment).

The Cern experiments are trying to provoke collisions of 3d protons in order to find what the 4d stuff folded up tight inside them will release. They are slightly dangerous however, in the same manner in which nuclear fission can produce atomic explosions, but the mass heavy elements used in fission are highly unstable and since the mass is relatively large (at least by atomic standards) then applying E=MC² s great deal of energy is released.

The Cern collision masses involved are very much smaller, however the sub-nuclear forces inside the protons are potentially much larger, but since we are not playing with mechanistic 3 dimensional forces, but 4 dimensional subatomic God forces, then the likelihood is that the resultant form of energy released would be of order rather than chaos. So not the entropic chaotic destructive energy released by tearing apart 3 dimensional atomic nuclei.

Smashing protons together will likely yield no significant results since there is no way for the outside energy to exceed the inside energy, one cannot get into a tin of beans with a banana. So their attempts to break into heaven will fail, and despite their claims from time to time, that they have ‘found something’, these are later quietly refuted or dismissed some months after the fact, to significantly less fanfare to that with which the original claims themselves were made.


It’s really just science theatre, meaningless and wasteful entertainment for the masses. There is no danger in the Cern experiments and there is really no purpose or hope of any kind of revelatory outcome, despite the silly and childish 666 symbolism in the logo of the Cern collider which is a deliberate attempt to stoke fear and paranoia in the heart of the more easily scared among the conspiracy theorists, but also as a token of their allegiances and intentions. Namely Lucifer and Satan (the light consciousness presently inhabiting the planets Venus and Saturn) using their human science puppets to attempt to break into the 4th dimensional throne of heaven and all creation.
Posted by Truthspoon at 23:47